Hello and welcome to part 1 of Three Keys in the Desert, my science fiction novella. Over the course of June 2017 I posted the entire thing on my website! To read the 26 parts of the story just scroll down and start below.

If you’d rather read the story as one book, you can buy the ebook. To stay updated on future projects, you sign up for my New Release Mailing List. 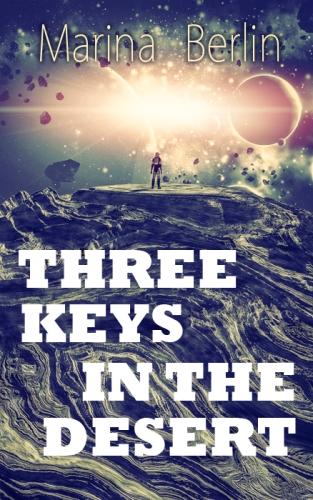 Kim’s clothes clung to his skin, soaked with sweat. His head pounded from the heat.

He forced himself to walk faster. He’d walked home once before in daylight, years ago, discharged early from the infirmary with a fractured arm, but the painkillers had made everything a blur. He didn’t remember the heat pressing down on him, or the ground under his boots being this shade of yellow.

The shaded entrance to his building got closer, until finally he stood on cool, hard cement. There were no temperature adjustment systems in the district, the only place with electricity was the Compound, but still the peeling, gray walls of the lobby felt like a cool breath compared to being outside.

Kim paused before going up the stairs to the second floor. Supposedly “some woman” was waiting for him in his room. The kid who’d delivered the message couldn’t give Kim any more details, but it was pretty obvious this was one of Sol’s games. She wasn’t usually sober enough for something so elaborate, but once in a while she was known to make an exception. The only surprising thing was that she’d chosen the district to deal with him, in the middle of the day, when everyone was at the Compound.

On the second floor, the door to Kim’s room was slightly ajar. Of course she’d want to do it here, where he slept. Sol was never short on imagination when she wanted to torture people. At least none of his friends would be here to see it.

He braced himself before pushing the door open.

The four bunk beds inside were undisturbed. Made up neatly, just as they were when Kim left. The desk stood as it always did, by the window. Behind it sat a woman who wasn’t Sol, and behind her stood a tall man, arms crossed over his chest. The light from the window obscured his features.

“You’re Kim?” the woman asked. Her skin was pale brown, like Kim’s, but her hair was shorter, pulled back into a curly ponytail.

“Yeah,” Kim said. He knew the faces of everyone who lived in the 942, young and old, and he’d never seen either of these people before.

“You know who I am?” the woman gave him a questioning look.

Kim felt the sweat cooling on the back of his neck, like the touch of a ghost. He was certain now that he’d never seen either of these people before. Which meant they had to be from one of the other districts. Except no one could travel between the three districts, certainly not during daylight. No one except people like Sol, and she didn’t even share that power with her favorite elders.

The woman’s uniform looked luxurious – clean and well fitted, like she got it yesterday. None of this made any sense, but the only conclusion possible was that she was like Sol. She was a Key.

“In two days,” the woman said calmly, “you will make arrangements to take care of an injured boy who will be delivered to you. You’ll be informed, later, where to pick up–“

“I don’t know who you think I am,” Kim said, the words tumbling out of him. He had to speak now, before she could finish. He didn’t know much about Keys, except that there were three of them, and they all knew each other. Which meant this was probably one of Sol’s games. Weirdly convoluted, but so was summoning him here in the first place. Maybe she wanted to make him break the rules for real and then punish him officially.

“I came here without informing my Key, without her permission,” Kim said hurriedly. “But that was only because I assumed, being called away from the Compound at this time of day, that you were her representative. If that isn’t true then there’s been a misunderstanding, because I would never–“

The woman raised her hand, and the gesture froze the words in his mouth.

Kim had never seen anyone but Sol show that kind of arrogance. It sent a chill down his spine.

“I understand,” she said. She reached inside one of her pants pockets, and produced something small and shiny, throwing the object on the table. The thud of it hitting the metal surface echoed in Kim’s stomach. “This one doesn’t open the door to your Key’s room,” she said, as if Sol parting with her room key, for any reason, was a possibility. “Like I said, a body will be brought to you. You will provide it with a bed for a few nights, that’s all.”

Was this really happening? Was a foreign Key really in his room in the middle of the day, asking for a favor? It had to be one of Sol’s tricks.

“Believe me,” the woman went on. “If I wanted to set you up, I could have just taken what I know about your crimes in the last few months straight to your Key. I wouldn’t have bothered with all this.”

His crimes?  Like slipping a packet of mango soup to a secondyear of Sol’s friends had decided to stave? How would this woman even know about it?

She didn’t answer, but her face changed. The darkness in her expression made Kim want to press his back against the nearest wall.

Was she really asking him to violate every rule he knew of by going behind Sol’s back? If this was for real… if Sol found out, Kim could lose everything. This wouldn’t just end in a beating, Sol would destroy his life. The smart thing to do was say no and take his chances.

Except. If he said yes, who knew what he could get in return? Getting a favor in return from one of Sol’s friends? Someone with Key privileges? What would that even mean?

He opened his mouth before his brain could force him to reconsider. “And what do I get out of it?”

The woman steepled her fingers. “Get out of it?” Her look was solid pressure on his lungs. “You get to keep your recent crimes secret.”

Kim willed himself to breathe. Every exhale was a struggle to keep his mouth shut, but he could do it. He had to. He knew, without being able to rationalize it, that if she spoke first he’d have something to gain.

The man behind her, his uniform stretched tight over his broad shoulders, leaned forward, his mouth next to the woman’s ear. He was likely her First. Probably asking for permission to put his fist through Kim’s rib cage.

“All right,” the woman said, and Kim let himself breathe out a sigh of relief. He regretted it immediately, when the woman’s eyes narrowed.

“Name something, and I’ll see what I can do.”

Kim opened his mouth, but the words wouldn’t come. What did he want? Resources? She’d never give up anything really valuable. Access to another district? No, his life was in 942. Help with Sol? At some point? But how to phrase that? He realized he hadn’t closed his mouth. “I want…” his brain desperately tried to come up with something plausible. “I want a favor. Unspecified. I want your attention, some time in the future.”

The man behind the chair bent over farther, until his head was almost resting on the woman’s shoulder, whispering something in her ear.

“Fine,” she bit out after another long pause. “You’ll hear from me in two days.” The chair legs screeched against the stone floor as she rose.

Kim stepped aside to let her and the man pass. They left the room without another word.

Once the sound of their footsteps faded down the hall, Kim felt like the room was suddenly filling up with air again, making his head spin. He took a step back, and then another, until he stumbled against a bunk bed.

This was too much. What had just happened was impossible. His friends would say he got high without them, that he’d taken a stroll outside and the sun made him hallucinate. Who would believe a foreign Key summoning him in the middle of the day, asking for a favor?

Kim’s feet kept moving, until his back found a wall to lean against, solid and comforting. His knees felt shaky, urging him to slide down to the floor.

Why hadn’t he asked this woman for her name? What district she was from? She hadn’t come asking for a favor, she came to threaten him to do her bidding. Just like Sol would do.

But it had been a long time since Kim had been powerless and pathetic. Since the fear of Sol had ruled his life. He’d managed to make this Key give up something valuable. She had access to medical vouchers, food supplies, disciplinary records. A favor from her could save his life someday.

He had to get back to the Compound. If this really had nothing to do with Sol, he couldn’t risk drawing her attention.

It didn’t occur to him until much later, when he was sitting in front of a screen, staring at his Armory Specialization 4017 exam and trying to figure out which bed he could swipe from which building with minimal gossip, that the Shutdown was only seven days away. The foreign Key probably wanted him to hide someone in 942 precisely for that period, when every centimeter of the grounds would be inspected.

He’d been an idiot. She would have given him anything.